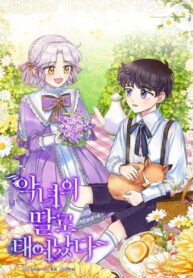 Vi legas Born as the Daughter of the Wicked Woman, mirinda manhwa.

Born As The Daughter of the Villainess I was born as the daughter of a wicked woman in a novel. At birth, my mother had already been exposed to her evil deeds and was confined to the spire, and would soon face a miserable death in the hand of the main characters. I looked at my mother, who was still searching for her ex-husband until the moment she died and held her hands. My little hand got tangled with my mother’s rough hand and her eyes full of warmth turned to me. “I understand Mom.” “….” “Don’t suffer anymore, sleep tight.” Don’t wait for the dad who won’t come. Tears fell from my mother’s eyes at my words, and soon she fell asleep peacefully. Since the novel’s “Wicked Woman” is now dead, her daughter, I will be beaten to death by people tomorrow night. And the second part of the novel will begin. A warm novel in which the daughter of the main characters begins her adventure full of happiness. But I didn’t want to die, and I had no intention of letting the story flow that way. “It’s okay to be mean.” I decided to completely re-write the second part of the novel because it’s a life that may be killed anytime anyway
Rilataj Nomoj
The Wicked Woman’s Daughter
악녀의 딸로 태어났다

Born as the Villainess’ Daughter